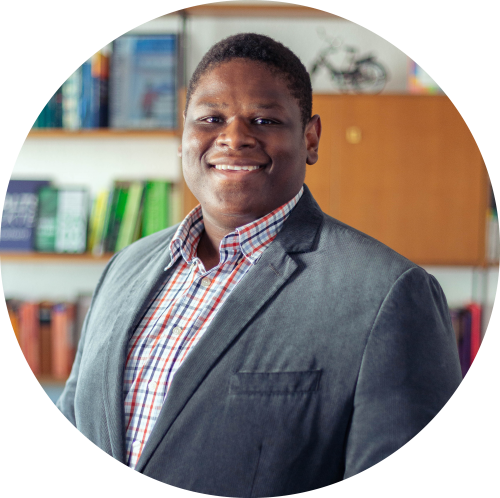 Prof. Dr. L. Narku Laing is a diversity trainer, founder, human rights advocate, and social entrepreneur. For the past six years, he has been leading his social enterprise Vielfaltsprojekte GmbH to fight discrimination in our society and promote diversity. He was appointed professor for social sciences and racism research at the EvH Bochum. In 2021, he was a delegate speaker at the One Young World Conference. For his excellent lectures on theories of racism, he was awarded the Best Teaching Award by Zeppelin University Friedrichshafen.

He has given Keynotes on diversity and discrimination at Volkswagen AG, Siemens, Deutsche Bank, the Helmholtz Academy for Executives, and the Goethe Institute, among others. He also advises and accompanies organizations, associations, and societies in the private and public sector, such as Mytheresa, the Schaubühne Berlin, or the town of Unterföhring, in the diversity-oriented opening of organizational structures.

As an interview partner or commentator, he participates in the public debate on diversity and discrimination. Interviews, commentaries, and media contributions with and by him have been published in Süddeutsche Zeitung, tagesschau24, SKY Sport News, Bayerischer Rundfunk, Frankfurter Neue Presse, or Münchner Merkur, among others.

He is an “Eine Welt der Vielfalt e.V.” certified peer diversity trainer and in 2016 trained in working with educationally disadvantaged young people as part of an amplifier advanced training program run by the Federal Agency for Civic Education. From 2017 to 2021, he worked as a research assistant at the Geschwister-Scholl Institute for Political Science at the University of Munich (LMU), where his research focused on the topics of migration and racism. In 2021, he successfully defended his dissertation on racism in Germany. Furthermore, he is a lecturer on theories of racism at Zeppelin University in Friedrichshafen and the University of Cologne.

Prof. Dr. L. Narku Laing completed a B.A. in Sociology at the Goethe University in Frankfurt. During a study abroad program at King's College London, he advanced his knowledge in the fields of history and religious studies and wrote a blog for the Frankfurter Neue Presse about diversity. During his M.A. in Politics, Administration, and International Relations at Zeppelin University in Friedrichshafen and a stay abroad at the University of Zurich, he was sponsored by the Hans Böckler Foundation's “Begabtenförderwerk”. He wrote his master’s thesis as part of a cooperation internship at the United Nations in Geneva.

As an expert on racism, he participated in the British-German Democracy Forum in 2021. In 2020, Prof. Dr. L. Narku Laing was named 30 under 30 of the #GenerationGrenzenlos by the Hertie Foundation. For his commitment as a diversity trainer and on the board of Humanity in Action Deutschland e.V., he was appointed to the Knowledge Pool of the St. Gallen Symposium as a "Leader of Tomorrow" and was awarded the Young Leaders Bursary by the Leadership Excellence Institute Zeppelin. He is also a member of Network Inclusion Leaders and a Humanity in Action Senior Fellow.

Today, he is volunteering, among other things, as a mentor for migrants affected by poverty and as an honorary member of the selection committee of his alma mater. In addition, as part of the pro bono offer of Vielfaltsprojekte GmbH, he supports students at Zeppelin University with two “Deutschlandstipendium” scholarships as well as the diversity München e.V. association and is the official sponsor of the Wiesbaden Phantoms youth league team. In the past, Prof. Dr. L. Narku Laing has volunteered as an American football coach in the national youth league and the national selection. Furthermore, he was Chairman of the Student Council as well as a member of the Senate and the Scholarship Commission at Zeppelin University. From 2015 to 2018, he was a member of the board of Humanity in Action Germany.